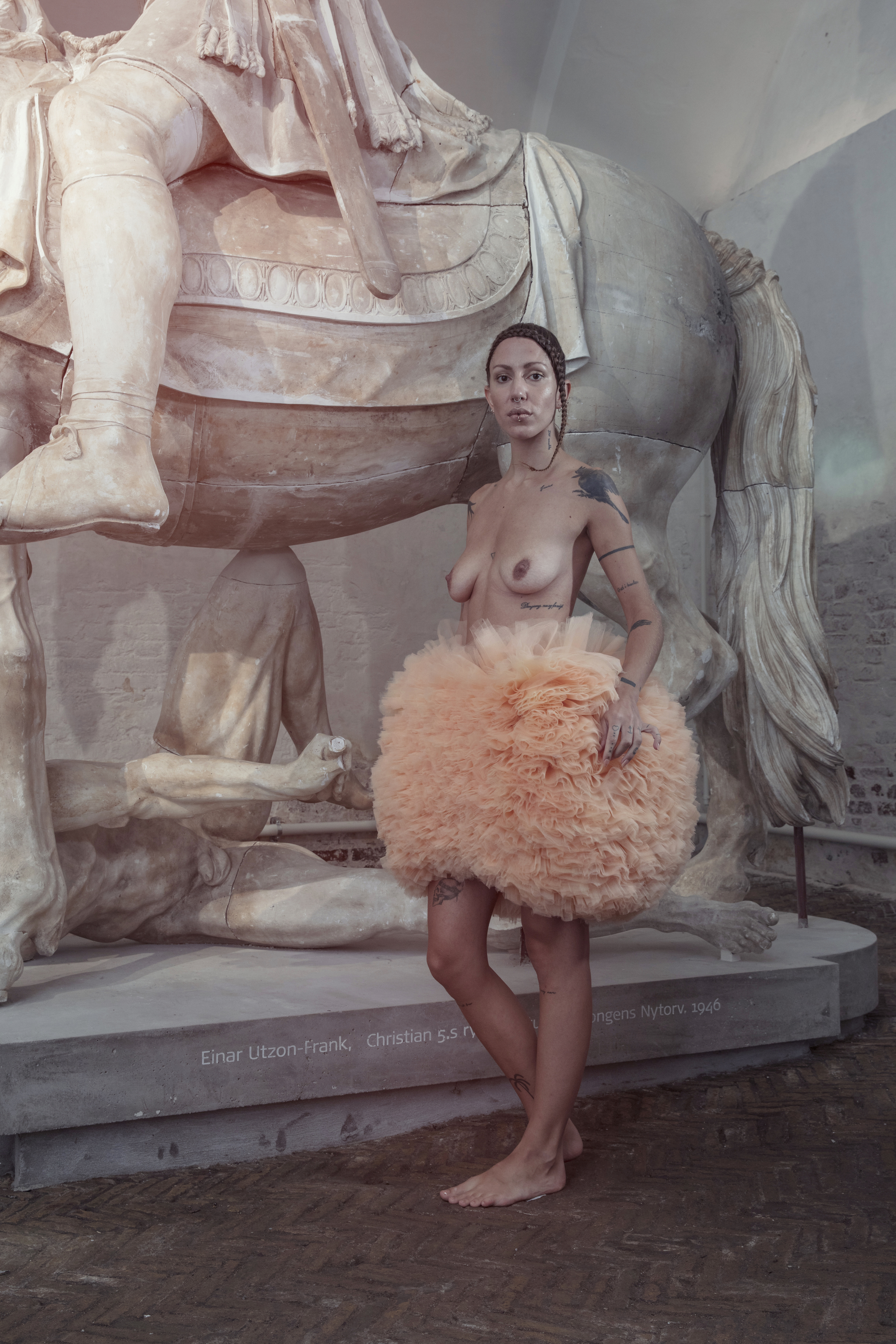 Once upon a time, during the first chapters, the fairytale of Nicholas Nybro was told, with inspiration from old famous fairytales – told to every child in every kingdom among the world.

Starting out with words from Chapter 8 of Alice in Wonderland, where the queen of hearts plays croquet and H.C Andersens tale The Snow Queen, told in two scenes and collections: The SQ1 and SQ2.

The SQ1 with a scene set in childhood, summer, harvest time and the reinterpretation of old danish Morten Korch movies, with a romantic view of danish farming idyll.

And The SQ2 scene were constructed around the three central themes; “The escape”, “The Innocence” and “The beating heart”.

And then around chapter 4, 5 or 6, the inspiration of the Nicholas Nybro fairytale, went from the Alice in Wonderlands surreal croquet games with flamingoes, the broken mirror of The Snow Queen and the romantic view of old danish Morten Korch farming idyll in Denmark, to an inspiration caught from celebrating the fact of getting old and fabulous in a scene called: “More than a number”.

And now the latest chapter called: “THE BODY”, set in a scene, that marks a tribute to the human body in all it’s glory, thousands different ways of looking and the fact that, the body will change throughout life.

In the scene of Nicholas Nobro’s SS18 show “THE BODY”, the models were walking the catwalk, in historical surroundings, all embracing the body of their own.

Some, in Nicholas Nybros latest collection, where the colors went from beautiful nude shapes and beige nuances to dark and warm brown. The silhouette from avantgarde to oversized and even see-through dresses, with the body more or less revealed.

And some, without a cloth and bare naked, as in the fairytale “The Emperor’s New Clothes” by H.C Andersen.

But in contrary to ”The Emperor’s New Clothes “ the show was not related to the fact or theme of H.C. Andersens fairytale: “If you could not se the clothes, you were unfit for your position, stupid, or incompetent”.

Nicholas Nybro showed a different side of both the fairytale and the statement, during his SS18 show, which was about embracing the body in every shape, color, age and magic. And hopefully making a statement and encourage a discussion about the body ideal related to fashion.

Once upon a time a fairytale, of the danish fashion scene began. Containing more than one of the famous fairytales, told to every child in every kingdom among the world.

In this fairytale, the story is told by Nicholas Nybro and the story is still traveling along side the queen of hearts, the mad hatter, the snow queen and even the farmer idyll of Morten Korch.

And yet, it is taking both the main character, the chapter and the scene. In this scene, it is taking taking the lead in more than one matter. In the matter of making a fairytale come true.

A fairytale where age and size do not matter in order to look beautiful, with or without clothes.

And that sets the beautiful and avantgarde scene!