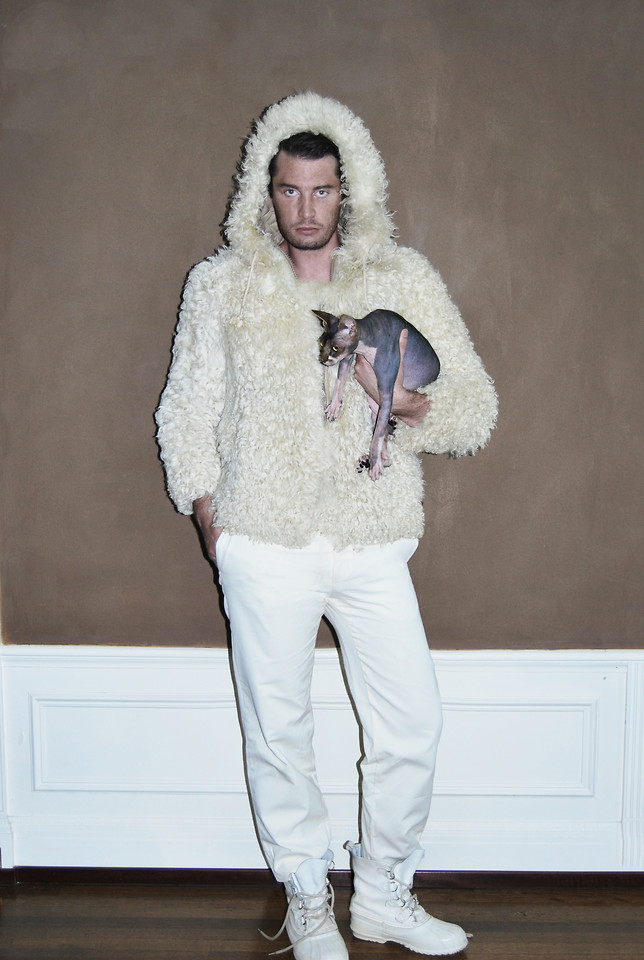 Men have been wrapped in fur for ages and are now once again.
Since the border between X and Y have been erased in the scene of fashion, fur is no longer related to gender.

In fact fur, as a garment or material for clothing, has a long history and mankind have worn this beautiful and warm material for millennials, with no affiliation to gender. It is known to be the oldest material used for clothing and can be dated back to the times of some of our oldest ancestors – The Neanderthals from the Pleistocene in the stone age, millennials ago.

Back then, the fact of wearing fur was not related to gender and had no ethical or moral thoughts behind, but was strictly related to the matter of survival. To survive cold winters and the harsh terrain of that time, mankind had to keep warm, and back in ancient times they used fur and animal hide as a part of our hole survival and existent.

In the cold north our ancestors were dressed in fur from reindeer, polar bear, seal and fox. Further south, they wore fur from cats, fox or sheep, while the royalty and nobility could wear fur from exotic animals such as ermine or winter fur from squirrels.
However, for royalty and nobility it was not only a question of survival. Wearing fur from exotic animals also showed a kind of status and power. And the fondness of finery and tendencies to vanity has since been associated with wearing fur.

Since then fur has been a recognizable garment, and in times before the first world war to the 1920’s, fur interred the fashion scene for good. And later on it became a question of personal morals or political matter and the new focus on animal welfare where added.

In the 1970’s artificial fur, became an alternative and was, from the beginning,
produced in many colors and lengths and could be easier to clean than real fur, but the environmental cost of dyeing and manufacturing has later been seen as problematic.
However, fur has played an inevitable role and have been connected with something as modern as sustainability, since the very first hunting and it still does to this very day!

Today, fur is still associated with the survival of the cold from north as well as fashion and luxury. But it is also a garment that is being questioned and the fact of wearing fur has become a political issue.

Arguments like “fur is natural” or “fur is murder”, creates a loud echo and animal welfare organizations are still struggling hard against the use of fur, but at the same time the sustainable profile of fur has certainly not become less vigorous.

In these times, most of us aim to be sustainable and carrying about animals as well as the environment. An aim reflected in the modern ways of farming fur, and using all of the animal (for example for bio fuel) and not just the fur.

So, we are sustainable and we care about the animal and the environment.

And the fact of wearing fur today, is not only a matter of survival, political matter, animal welfare or gender.

Fur has somehow regained it’s position as a non gender-related garment and is now taking a part in the androgynous look, where line between the X and Y gender are more or less erased.

It crossed the line between gender from the beginning and did it centuries before fashion or vanity played the major part in dressing, as it does today.

Now, fur has somehow regained it’s position as a non-gender-specific garment and is now taking a part in the androgynous look and gender blending, where the borders between XX and XY does not seem to be irrelevant and even erase the line once again.

So to be wrapped in fur can not create one between man and woman – in theory or in life! And now it does not raise a question about surviving the winter, being a loyalty or your gender.

It is all about that fact if you want to be a man rapped in fur!

You have the choice to not wear fur or you can wrap it around you and pretend that you are North of the polar circle, trying to beat natures wild and cold site and you can do it while being as sustainable as our ancient ancestors. You will probably look beautiful anyway, but the decision are in your hands.