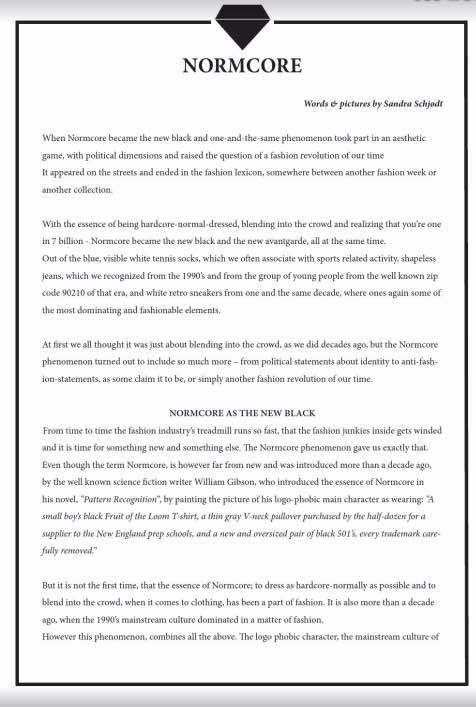 When Normcore became the new black and-one-and-the-same phenomenon took part in an aesthetic game with political dimensions and raised the question of a fashion revolution of our time. It appeared on the streets and ended in the fashion lexicon, somewhere between another fashion week or another collection.

Out of the blue, visible white tennis socks, which we often associate with sports-related activity, shapeless jeans, which we recognize from the 1990’s and the group of young people from the well known zip code 90210 of that era, and white retro sneakers from one and the same decade, where ones again some of the most dominating and fashionable elements.

At first we all thought it was just about falling into the crowd, as we did decades ago, but the Normcore phenomenon turned out to include so much more, from political statements about identity to anti fashion statements, as some claim it to be or simply another fashion revolution of our time!

Normcore as the new black
From time to time the fashion industry’s treadmill runs so fast that the fashion junkies inside gets winded and it is time for something new and something else!

The Normcore phenomenon gave us exactly that. Even though the term Normcore, is however far from new and was introduced more than a decade ago, by a well known science-fiction writer William Gibson, who introduced the essence of Normcore in his novel, “Pattern Recognition”, by painting the picture of his logo-phobic main character as wearing: “A small boy’s black Fruit of the Loom T-shirt, a thin gray V-neck pullover purchased by the half-dozen from a supplier to the New England prep schools, and a new and oversized pair of black 501’s, every trademark carefully removed.”

But it is not the first time, that the essence of Normcore, to dress as hardcore normally as possible and blend into the crowd when it comes to clothing, has been a part of fashion. It is also more than a decade ago, where the 1990’s mainstream culture dominated in a matter of fashion.

However this phenomenon combines all the above. The logo phobic character, the mainstream culture of the 1990’s and the version of our time, with depth and aesthetics, where geographic areas, political statements and even sustainability can be a part of it.

An aesthetic play with political dimensions becomes a fashion revolution
Normcore has now taken over the pedestal from the hipster and at the same time, the phenomenon also have local variations where the hipster movement is so strong that a full beard, vintage denim and old-school tattoos have become a sort of Normcore – Simply because the extreme has become normal!

The political statements are either a question related to the logo-phobic character we already met, where all logos are carefully removed or never even been there in the first place! It can be a question of identity, where the phenomenon Normcore shows the concepts of identity, norm and culture in a personal matter and not through a fashionable look. It could simply be a question of classic sustainability, in the sense, that the key items of the Normcore phenomenon can be reused or vintage items. Or it could be something new and breathtaking in an epochal way!

We are now writing a new chapter in the (fashion)history and we knew it was coming, as it has before when the fashion couturier Coco Chanel after the first world war made it possible for women to wear trousers, pullovers and other casual and comfortable elements, with inspiration from the gentlemen’s universe and making them feminine and chic. And when the young punk movement made their own fashion revolution during the 1970’s, with the well know British designer Vivienne Westwood in front – another fashion revolution!

Now young people of our time have created their very own fashion revolution – Meet Normcore!

The phenomenon we first thought was about being hardcore normal dressed, blending into the crowd and embrace the fact that you are one in 7 billion, turned out to the a question about identity and political, as well as, geographic matters and in the end might as well turn out to be another fashion revolution – One of our time, where the essence of being hardcore-normal dressed where white tennis socks and shapeless jeans or the old-school tattoos related to the hipster movement as well as the logo-phobic character are part of the main theme, that makes the well-known and lived by “fashion junkie image” where you used to dress to impress and stand out of the crowd become the previous chapter in one way or another!

In other words, Normcore can have different faces and backgrounds. However the essence is one and the same: Simple and minimalistic at first glance and with depth, aesthetics and statements behind the scenes.

The less is more concept is far from adequate anymore and one is tempted to say that “nothing is more” is more correct! A new fashion revolution has begun and it can be about blending into the crowd and realize that you are one of 7 billion, taking the role of the logo-phobic, sharing a political statement or just be simple, minimalistic or hard-normal dressed!