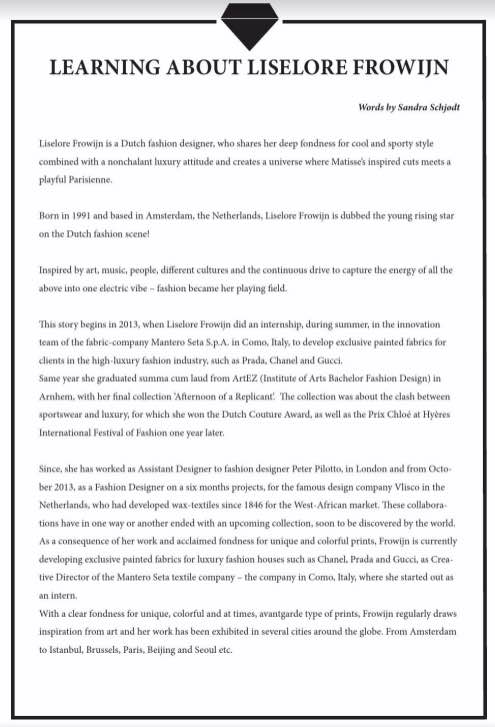 Liselore Frowijn – Dutch fashion designer who shares her deep fondness for cool and sporty style combined with a nonchalant luxury attitude and creates a universe where Matisse’s inspired cuts meets a playful Parisienne.

Born in 1991 and based in Amsterdam, the Netherlands, Liselore Frowijn is dubbed the young rising star on the Dutch fashion scene!

Inspired by art, music, people, different cultures and the continuous drive to capture the energy of all the above in to one electric vibe – fashion became her playing field.

This story begins in 2013, where Liselore Frowijn did an internship, during summer, in the innovation team of the fabric-company Mantero Seta S.p.A. in Como, Italy, to develop exclusive painted fabrics for clients in the high-luxury fashion industry, such as Prada, Chanel and Gucci.

She worked as fashion designer Peter Pilotto’s Assistant Designer in London and from October 2013, as a Fashion Designer on a six months projects, for the famous design company Vlisco in the Netherlands, who had developed wax-textiles since 1846 for the West-African market. These collaborations, have in one way or another ended with a upcomming collection, soon to be discovered by the world.

As a consequence of her work and acclaimed fondness for unique and colorful prints, Frowijn is currently developing exclusive painted fabrics for luxury fashion houses such as Chanel, Prada and Gucci, as Creative Director of the Mantero Seta textile company – the company in Como, Italy, where she started out as an intern.

With a clear fondness for unique, colorful and at times, avantgarde type of print prints, Frowijn regularly draws inspiration from art and her work has been exhibited in several cities around the globe. From Amsterdam to Istanbul, Brussels, Paris, Beijing and Seoul etc.