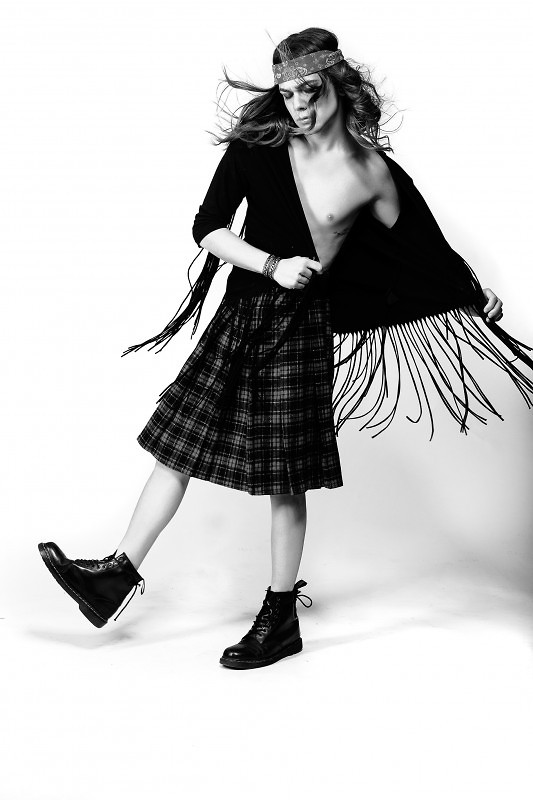 The androgynous look or the connecting of the masculine and feminine sides, by moving the feminine over to the masculine and vice versa, where lines between gender had been erased or at least had become invisible to the naked eye a long time ago, still takes it dominating part on the fashion scene!

However this play with gender have been seen on both sides, of the former border, for decades and in some cases even centuries. What used to represent the masculine silhouette took part in women’s fashion as early as in the 1920’s and later when Yves Saint Laurent introduced Le Smoking for women in 1966. And it have played a more and more dominating role in women’s fashion ever since.

The feminine silhouette or at least feminine elements and characteristics, like the high heels and vanity, who usually have been connected to the feminine sex for centuries, where not connected to women in the beginning.

The high heels and the vanity, which were often one and the same, where in fact worn by vain men, before women became equal in that era. In our time, one of the first glimpses we had of the feminine silhouette moving into to men’s fashion and vice versa, was in the 1970’s with the punk culture, where the gender was nowhere to be found in young peoples clothing. With inspiration from the glam-rock star David Bowie and Marc Bolan, who dressed as showgirls and inspired their fans to, regardless of gender, to let their hair grow and wear t-shirts, slim jeans and pearls.

However the vice versa, (feminine lines in men’s fashion) haven’t played an equal dominating part, as the masculine had in the feminine universe. Until know, where the inspiration from both genders seems to play an equally part on on both sides of the border between the sexes and at one and the same time, erasing the fine line border, that once was there, separating gender.

Now the androgynous look are presented in both sides of the erased border. The lines are not existing and the androgynous look crosses worlds, scenarios and styles in an infinity. There are no limits and no rules for feminine lines in the masculine world, and vice versa. With the essence of a look, that does not reveal gender, by how one dress.

The androgynous look is basically a look that must include inspiration by genders’ fashion scene and make it an equal dance on the erased border, in order to appear! Know the question is about finding the essence and play with equally dominating feminine and masculine lines on the no-longer existing border, between XX and XY. And do it in a way that does not define gender!